2015 is looking like a Nollywood Juggernaut; more so with the return of the biggest names in Nollywood.

Unlike previous years where we saw the rise of some new Nollywood acts, this year promises to stun audiences around the continent with the return of heavyweights such as RMD, Genevieve Nnaji, Ramsey Nouah, Rita Dominic, Taiwo Lycett – Ajai, Stephanie Linus and Liz Benson. Don’t get it twisted; you won’t be seeing these super stars all together in one movie – at least not yet.

However, you would have the pleasure of watching these actors in several movies due to be released this year.

These are the hot films hitting theaters in the next 8 months.

With a reputation as one of Africa’s finest actors, and an AMAA for Best Actor in a Leading Role for his performance in the Figurine; Ramsey Nouah is surely a box office star.
Here, Ramsey Nouah and Mercy Johnson-Okojie, team up to render an unforgettable, heart endearing performance as a married couple and are joined by Mary Njoku, to set off a thrilling chain reaction in this romantic drama. The movie has been consensually dubbed by movie pundits and critics to fly the ‘box office hit flag’ at full mast in cinemas.
The director – Obi Emelonye, renowned for directing box office hits such as The Mirror Boy, Last Flight to Abuja, will certainly have moviegoers swarming in great numbers to watch his latest work. The Movie is set to hit the big screen on the 15th of May 2015.

Following the huge success of “The Meeting”, The Audrey Silva Company is currently shooting a new movie – Titled Surulere. The movie is set in Lagos, Nigeria and focuses on Seun Ajayi’s character – Arinze’s life as an insignificant graduate trainee in a fictional agency, a serial debtor and a desperate young man eager to get ahead.
Directed by Mildred Okwo, the movie also features Rita Dominic, Beverly Naya, Kemi ‘Lala’ Akindoju, Linda Ejiofo, and Tope Tedela as well as rising stars Enyinna Nwigwe, Gregory Ojefua and Bikiya Graham- Douglas.

Dry is directed by Stephanie Linus and stars Stephanie Okereke, Liz Benson, William McNamara, Darwin Shaw and Paul Sambo. The film’s theme focuses on Vesico vaginal fistula (VVF) and under-aged marriage among young women.
Though a private screening of the movie was held at the Aberystwyth Arts Centre in Wales, UK, December last year; the film is scheduled to premiere in Nigeria and Across Africa later in this year. 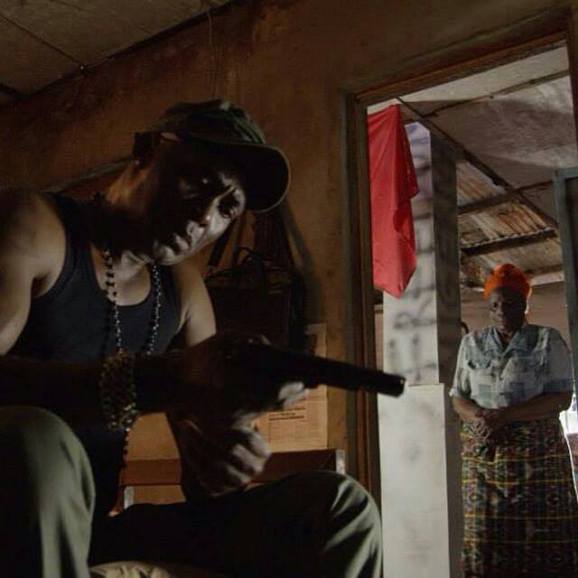 Richard Mofe-Damijo leads the cast of this action thriller produced by Rogers Ofime and directed by Emmy Award Winner Curtis Graham (Greyhouse films). The movie also features Olu Jacobs, William R. Moses (CSI, Touched by an Angel), Taiwo Ajai-Lycett Ivie Okujaye, Ifeanyi Williams, Daniel K. Daniel and Chucks Chyke.
The movie is a narrative piece, explaining the changes brought to the residents of Olobiri by big oil: polluted waters, poisoned fish, infertile crop lands, political corruption and violence. The film tells the story of one village, whose elders signed on to oil drilling unaware of how this industry would change their lives and their village forever.
#1 Genevieve’s first shot at producing a feature film (Movie Name Yet to be Released)

Genevieve Nnaji is such a huge movie star in Africa and “whatever she is cooking, fans are buying”. Though she is yet to reveal the name of the movie – the fans are eager to see the actress back on the big screen.
The movie’s director Isaiah Bako (whose previous works include “Fueling Poverty” and “Braids on a Bald Head”), has also filled fans with high expectations because this is Bako’s first feature film coupled with the fact that Nnaji has not starred in any film in the last two years or thereabouts. Therefore, there is high anticipation that Nollywood is about to be regaled with another classic, given Bako and Nnaji’s antecedents. It will be recalled that following the controversy, surrounding the partial removal of the fuel subsidy in 2012, Bako produced and directed Fueling Poverty, which was barred but went on to win an AMAA for best documentary that year.

We will provide reviews as soon the movies hit the cinemas.

One thought on “Big Screen: Top 5 Most Anticipated Movies of 2015”