The creative union between Frank Rajah Arase, the Nigerian born director and Abdul Salam Mumuni, head of Venus, a production company headquartered in Ghana can be widely credited with reigniting the contemporary Ghollywood culture. If “New Nollywood” is entirely a Nigerian concept, then the series of racy films, shot over a 4 year period by these two disruptors can be regarded as the Ghanaian equivalent. Not particularly well made, the films sought to provide alternatives for Ghanaian viewers hooked on Nollywood fare. This arrangement included the grooming of young local stars- mostly marginally talented, but light skinned and easy on the eye- as the Ghanaian answer to Nigeria’s genuinely popular movie stars. Nadia Buhari, Majid Michel, Jackie Appiah and Juliet Ibrahim were all beneficiaries of this partnership.

But financial success for investors and a surge in popularity for their actors do not always translate into an edible viewing experience for audiences. While these films,- with titles such as Forbidden fruit (Heart of men) in Ghana, The Game and Princess Tara, – were churned out with all the prolificity of Chico Ejiro in his prime, they lacked any real substance or artistic merit. Many of them were shamelessly exploitative, openly derivative and thinly acted. But no one could accuse them of lacking the thrill factor.

Although produced for his own Raj and Heroes imprint, Iyore continues in that frenetic, hyper kinetic tradition of Mr Rajah-Arase. He journeys home to Edo state and unspools a sprawling, mythical tale of love, loss and the concept of reincarnation. Iyore is billed as a mix of fact and fiction, but it is hard to see what is fact here. The film is best digested as a fantastical trip through time and a contemplation of the historic traditions of the old Benin Empire.

Think of Iyore as Rajah Arase’s own Inception, an epic, mind bending, time travelling film within a film. Actually, take away the mind bending part. Ditto the underlying mystery. For even at its most engaging, Iyore still plays like a drama with very low stakes, the genuine suspense decibels lowered to the barest minimum, overpowered by the shrillness of the presentation. 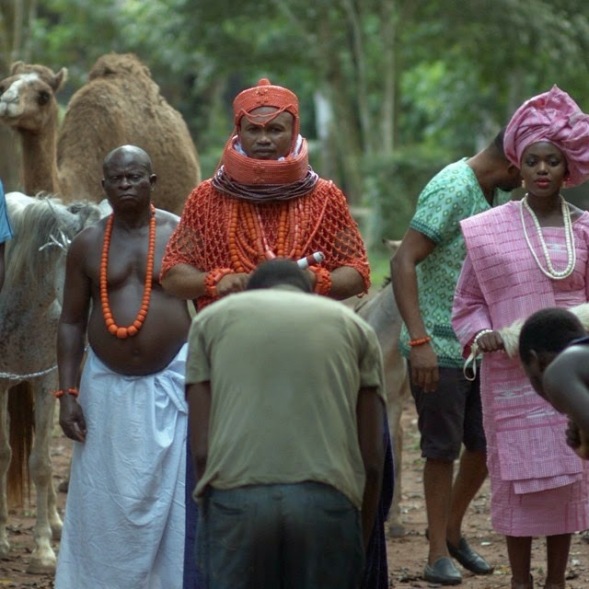 What emerges from the grand scale of Rajah Arase’s vision is two lovers; man and woman, a singular act of betrayal and a doomed love affair that would last forever, its repercussions filtering through time and destroying lives in its wake.

Iyore opens with a cosmetically aged Joseph Benjamin and a smooth faced Rita Dominic, who save for her dowdy clothes hasn’t aged one bit. They are star crossed lovers united once again, after a series of tragic events that would haunt their love affair from inception, right till the end of time. And maybe even after.

Dominic’s character narrates a story to her whiny teenage son. And this shocking, bittersweet tale of hers spans generations and continues even up till the present. Employing a series of time shifts, flash backs and forward cuts, Rajah Arase juggles multiple story arcs in the air at the same time, zigzagging through time and space.

There are the aged lovers, Osarugwe and Eweka, (Rita Dominic and Joseph Benjamin), then in a series of flashback scenes, the origins of their romance is traced to when big haired Osarugwe was a young wife, teaching History at the local high school, and married to another. By some stroke of genealogy, Mr Benjamin (Eweka) becomes the crown prince of the entire Benin kingdom, but is also engaged to another. Both Eweka and Osarugwe were childhood sweethearts and now, Eweka resurfaces and wants back into Osarugwe’s life. Custom dictates otherwise though, and he is expected to marry a princess from a neighboring Yoruba kingdom (Okawa Shaznay).

This thread bears a striking similarity to events of previous generations, one which has been encapsulated as history and which Osarugwe narrates to her eager students. In this narration, a maiden queen shares a forbidden passion with a foolish warrior that ends in bloodshed. In yet another narration, occurring much earlier, an act of betrayal leads to devastating consequences. Somehow, all of these story arcs are related, somehow they must add up.

At its core, Iyore is a tale of 2 star crossed lovers, doomed by fate to remain eternally apart and this central romance, as well as what becomes of the lovers, is interesting enough to power a much more disciplined and reflective film.

But there is no such thing as a disciplined Frank Rajah Arase film. As such Iyore quickly finds itself succumbing to the director’s excesses. Too much is going on at the same time, too many plot swings and time jumps, but not enough time to follow anything to a satisfying conclusion. The arc between Osarugwe and Eweka especially suffers short shrift and the tension explodes prematurely instead of igniting to a slow burn.

The performances are a mixed bag. Rita Dominic is a movie star with a capital M and so brings with her a certain glamour. With nothing much to do, she tries to keep busy, finding ways to play a role that isn’t particularly challenging. While Dominic is dependable as usual, she does not quite disappear into the role of a Benin maiden. Her movie star looks constantly get in the way and it probably would have helped, if she had learnt a few lines of the local dialect.

Joseph Benjamin has built a career playing boring second fiddles to more powerful female leads. He is at it here again and while his hard work shows, he is still overpowered by his more famous co-star. Cameroonian Okawa Shaznay plays multiple roles that are essentially the same, but raised on Rajah-Arase’s style of rushed film making, she finds herself overpowered by the demands of her roles. Paul Obazele has a brief but scenery chewing role as a powerful Oba.

The picture is crisp, with plenty to look at in terms of fine scenery and colorful period costumes, but the locations, even those from the pre-colonial days have a contemporary feel, not quite convincing of their authenticity. Some noticeable energy is put into staging the fight scenes, but Iyore, like most Nollywood films still has more than its fair share of dialogue. The work of the makeup team shows so much that Rita Dominic looks more like a Zaron cosmetics model than a frumpy school ma’am. Special effects do great work until they have to stage a lightning scene that just comes off as silly.

Stories like Iyore deserve to be told on screen and Frank Rajah Arase scores valiant points for taking on such responsibility. But they also deserve to be told excellently, and Iyore is too flawed to be taken seriously, its screenplay, too clunky to fly. The film highlights the Benin Empire of old as a treasure trove of stories and certainly works better than Lancelot Imasuen’s dismal Invasion 1897 released last year. But it is still typical Nollywood fare.

In turns, good, then bad, then ugly.

One thought on “Movie Review: Iyore is Good, then Bad, then Terrible”