Iroh, a former FRCN boss who lives in London, wrote this on his Facebook wall 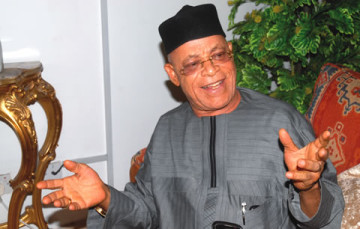 “I know that aficionados of Nollywood will have my guts for garters for saying this. I will say it all the same. But there again this is directed mainly to Ndigbo who, with some justification, traditionally claim “ownership” of the genesis of the Nigerian film industry because of their pioneer role in the home video enterprise.

To be sure Nollywood is said to have bumped up the re-jigged Nigerian GDP a few years ago and helped propel the economy to the biggest in Africa. The industry provides substantial outlet for the employment of scores of Nigerians from actors to crews and staff. No one can sniff at that. While this is not a critique of the quality of Nollywood’s output one cannot but observe similarities between Nollywood and the excessively exaggerated plots and storyline of the Indian films of the 60’s – even though art and technology have moved on in the five decades of the then nascent Bollywood.

But my concern here is whether the Igbo people take any notice of how Nollywood portrays their culture in the so-called Epic movies? Is art imitating life here or is it an instrument of correction and change? Do Ndigbo notice how they are portrayed as a people who can do just about anything for money, thus reinforcing the stereotype even though those who have looted Nigeria since independence are predominantly non-Igbo?

Nollywood’s Igbo characters will allow any moneybag, however, unscrupulous and questionable the source of his wealth to marry their daughters, however miss-matched. The parents will swallow even her most serious reservations the minute a wad of Naira enters their hands. The tradition of critical background inquiry as to whether the two parties are fit and proper persons, akin to the Catholic Bans of Marriage, which was an important feature of pre-marital culture in Igboland is thrown to the wind of questionable change. Money suddenly defines the character of the man and the marriage, and characters are called names like Eze Ego – King of Money.

Even the institution of chieftaincy, something the Igbos were too republican to bother about beyond the Obi of Onitsha, Eze Aro and one other I cannot remember is now mirrored in movies in the mode and ostentatious lifestyle of Roman Emperors with hordes of guards and royal maids. Where in Igboland did or do chiefs, or the present day Royal Majesties, have the authority to lock up offenders and even order their torture and sometimes execution? If that was the norm before my time, why did I not read it somewhere?

And more currently, why do they use mobile phones if it was before my time? So obviously this is a contemporary portrayal of the Igbo “kingdoms” . Or perhaps too much artistic license? I don’t know. Maybe you have the answer? There is a lot more that I find worrying in the manner Nollywood Epics portray Igbo race and culture. Not the least is that the writers, producers and directors of this distortion of Igbo tradition and culture are largely Igbo themselves. Maybe they know something that I don’t. Or perhaps because I am not a huge fan of Nollywood?”