The first 20 to 30 minutes of When Love Comes Around arrests the viewer with its witty dialogue spiced with a lot of subtext.  Love asks her lover to put the phone on speaker, so she could apologize to her friends, who are waiting for her arrival at the venue of her surprise birthday party.  He does and she announces to them that the best birthday gift to give herself will be to dump her boyfriend!  The drama between Didi and her boyfriend also contains beautiful subtext.

The animation at the beginning and end of the film somewhat makes one wish that the whole film had been made as animation, certainly a very beautiful inclusion in the film.

Good ironies are beautiful in film and they work well in When Love Comes Around.  Edewor is extolled for her competence in playing Vicky, a lady who looks unsure of herself 90% of the time.  Her facial expressions and words are typical of people who are easily influenced.  Vicky’s travails are a reminder that when taunted or teased for their choices or what they own, people should carefully evaluate the situation and not give in to the mocker’s attacks, which may stem from inferiority or envy.

Someone tells Vicky, ‘your husband is addicted to another woman’s cooking’, talking about the take-away she buys for him, ‘make sure they never meet’.  Could it be that the screenplay for this movie was split between the two writers and there was never a meeting between them to harmonize their work?  Those first 20 – 30 minutes belong to a hit while the rest of the screenplay/film is fraught with mediocrity.

The movie’s descent into blandness is troubling because if more time was given to the screenplay, we would have ended up with a ‘one-in-town’ movie.  It is clear that something went wrong with the script, killing all expectations from a movie that kicked off well.  Like someone said, ‘slow foundation work is the quickest in the end’, but the producers of When Love Comes Around failed to realize this.

The viewer is rudely awakened when Love decides to end her relationship with Douglas so as to settle for Kamal because the friendship between Love and Kamal remains platonic as far as the viewer can see.  In fact, it seems that she derides him or how else do you describe her decision to leave her friends in his restaurant to go and attend to another lover?

If the director thinks that his use of flashback to show us that Kamal and Love’s relationship blossoms into romance, then that technique fails because the flashback sequence looks more like a dalliance.  Films leave lasting impressions, so why will any film-maker dash the chance to write his or her name in gold, owing to the neglect of a vital process in film-making: screenwriting. 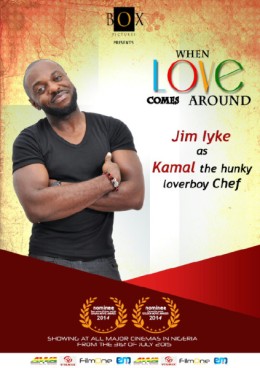 Love’s outlook on life is informed by her mum’s experience with her dad plus the mum’s insistence that all men cannot be trusted.  If the two ladies are true to themselves, they will remember some trustworthy men they knew at different times in their lives.  Labels and generalizations are jaundiced and lead narrow-minded people astray.

Didi’s predilection to date her friend’s ex-boyfriends must be informed by something the director fails to tell us.  Her character does not really have a life of her own.  It is regrettable that When Love Comes Around could not sustain the sublimity on which it took off.