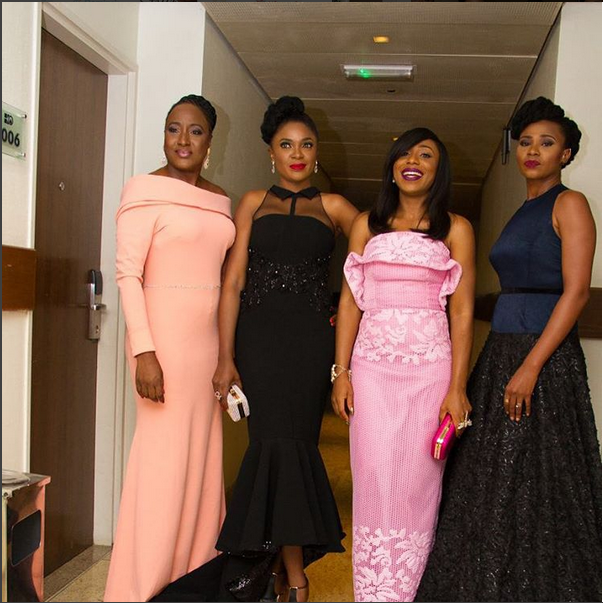 Fifty is a movie executively produced by Mo Abudu and directed by Biyi Bandele. Call it the most anticipated movie of 2015 and you’d be right on the mark. So anticipated was this movie that enthusiasts streamed in droves to cinemas this January to see if the hype was just a hype or held some truth.

The movie narrates the lives of four beautiful Lagos women in their 50s or approaching 50-years-old whose lives are unique yet sort of interwoven. Iretiola Doyle’s character, Elizabeth is an obstetrician with a daughter who she’s had a falling out with and a boy-toy to warm her bed; Nse-Ekpe-Etim’s character, Kate is a party planner staring God in the face with complete hope to heal her cancer yet burdened with an unemployed gambler husband; Dakore Egbuson’s character, Tola owns her own reality show and rubs her wealth and fabulosity in people’s faces; Omoni Oboli’s character, Maria is a highly placed executive in a construction company, lives alone with her maid and decides another woman’s husband is her cup of tea.

The start of the movie has one looking intently at the screen and trying to make sense of the pictures flipping past. Soon, you get who is who and begin to follow the story closely: the meat of the movie is on the story behind Tola’s quest to find out who her husband is having an affair with.

This exposé reels in the portrayal of modesty and reverence for the marriage institution by Elizabeth who has no problems indulging in her male guilty pleasure but outside the sanctity of marriage; the nonchalance of Maria towards the institution as she wants what she wants regardless of who owns it; and the sorrow of Kate as she wonders where she has wronged God while being accused of something she knew nothing about.

Fifty tells the story many women live with in our society today using top notch actresses who know their onions; though it would have been a tad more believable if some of their ages were really close to what was portrayed. The story of friendship, betrayal, desperation, infidelity, rape and sexual preference as age calls is told succinctly.

The movie was cast in the city of Lagos. Lagos is this time portrayed in a flattering way; perhaps too flattering for those who know Lagos as it is. The usual noise, traffic congestion, yellow buses and ‘alaye’ had no place in this portrayal of the mega city. Replacing it were structures and a calm almost alien to the city. Obviously, this movie is trying to wash away the awful images of Lagos that has been ingrained in the minds of people but was it too much? Many think so.

The unfolding of the lives of these women quickly takes your gaze away from the surrounding as you delve into the heart of the story. Somewhere in the intricacies of the lives of the star actors, you get a jolt as Emmanuel Ikubese who plays the role of the boy-toy takes nudity to a whole different level shaming the known nudity shown in Nollywood ( Warning: This movie is rated 18+).

Some parts of the movie though seemed uncalled for. The reason for the scene after clubbing with Elizabeth and her boy-toy making out for lengthier than normal time didn’t add anything worthwhile to the movie, hence should not have been there; or even Elizabeth’s removal of her panties before the camera.

First, Fifty gets a high-five for star-studding. Secondly, the re-enactment of real life issues women endure interpreted awesomely by the actors is a huge plus.

Iretiola Doyle killed it and especially with her constant infusion of the pidgin and Yoruba languages making her character more relatable and lovable. Her scenes elicited laughs here and there.

Dakore and Nse Ekpe-Etim showed in this movie why they are some of Nollywood’s most loved actresses by their beautiful interpretation of their given roles. Omoni Oboli’s acting? It was not electrifying but not bad either.

The cinematography, lighting, sound and picture quality are great and effectively employed.

While Fifty gets thumbs-up in various ways, as with anything else; there are also a few not-so-great moments by my own judgment.

Dakore’s character, Tola was a woman just turning 50 yet she looked to be in her late 30s. Perhaps the usage of make-up to mask her real age would have come in handy or maybe casting of a more age-appropriate woman.

I thought that Elizabeth’s daughter pardoned her rather quickly after being head-strong about it in all the scenes she appeared in and particularly after not receiving a grand apology for her mother’s wrongdoings.

There’s also the confusion in Kate’s Christian denomination as she can be seen moving from an obviously protestant church to kneeling and praying the catholic rosary before an altar in her home. Could this be a move to depict her desperation for an answer from God? Maybe but was nonetheless confusing.

I also found Tola’s barging into a company’s board meeting (one she’s not a part of in any way) an action quite far-fetched in reality. In reality, she wouldn’t have made it that far without being stopped.

In all, the director Biyi Bandele gets an A for effort in bringing to live characters in a way that will resonate with us for a long time to come. The scripting, however, fell a bit short on expectation as even when the ending credits were rolling, that feeling that there was something missing stuck with me and I ended up sitting for longer than normal maybe in the hopes that something will still happen instead of leaving the cinema.

The costumes? I thought they were beautiful.

You may have a different opinion when you see the movie; but would I recommend you see it at all? Definitely yes.