I made a resolution to see more of Nollywood movies at the cinemas this year. So far, just like many other New Year resolutions, I have scored worse than an ‘F’ in this decision. From the start of the year to date, I have only seen two Nollywood films. In my defence, there’s not been enough time to get things done, talk less of visiting the cinemas.

However, after seeing Mo Abudu’s ‘Fifty’, sometime in January this year, I knew I had to make good on my resolve to see more Nollywood movies this year. The enhanced production and content quality of Nigerian films indicate the growing professionalism in Nollywood.  This is not just as a result of improved technology or cinematography but our original approach at interpreting Nigerian stories to almost perfection. Also worthy of note is that movies are now becoming tools for international politics and advocacy. Hence, Nigeria cannot be left out if it plans to maintain a positive reputation beyond our borders.

It was in this high mood that I went to see ‘Wives on Strike’ by Omoni Oboli at Silverbird Entertainment Centre Abuja. What a comedy! 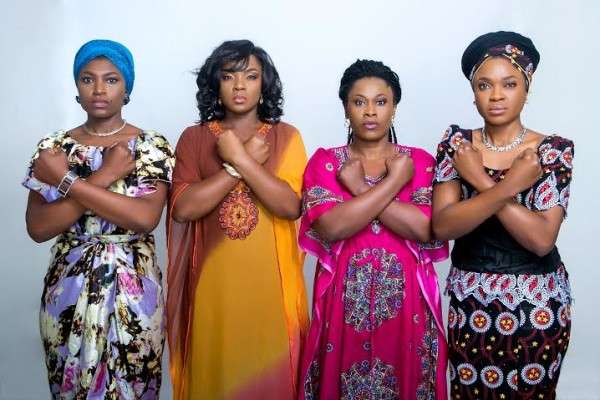 From the trailer, it is quite hard to figure out why women will suddenly ‘lock up’. I had to find out. I guess the suspense helped. Wives on Strike tells a peculiar Nigerian story. Women within a particular neighbourhood rallied themselves together to prevent thirteen-year-old Amina, from being given off in marriage by her father. Plea’s and entreaties by Amina’s mother were ignored. Mama Amina was forced to let out her troubles to Mama Ngozi, her neighbour when she was almost knocked down by a car on her way back home, lost in thoughts.
Mama Ngozi rallied fellow women who traded or lived in the neighbourhood to put a stop to the marriage. She narrated her discovery to her husband, Papa Ngozi, but he refused to interfere in the issue, opting rather, ‘to mind his business’. She fell back to her market group, who decided to embark on a sex strike, where they refused to have sex with their husbands until the matter was resolved.
The local story assumed a larger dimension and caught national and international attention, when a media team on a routine ‘vox populi’ filming, captured the women’s protest on camera, on the day of the marriage. The wife of popular Senator decided to take up the matter, after watching the clip on television and in a matter of weeks and months, all women, including prostitutes and single ladies decided to go on strike too.
Added protests from men – because they were being denied sex by their wives – piled more pressure on the government to ensure the implementation of the law and stalled the amendment of the constitution that further legalises child marriage. Eventually, the women won and called off their strike.
It is very interesting to see that our movie industry is now supporting efforts of NGOs and international development partners, in raising awareness and advocating for changes in some traditional, religious or cultural practises that are harmful to women and the girl child.

Hence, this movie should be seen by anyone who seeks a basic understanding of child marriage and why it is bad.
Now, what are the critical points?

Positives
The use of comedy to deliver this story was epic and smart. The producers did a good job telling us a sad story amidst fits of laughter and amusement. The last time I laughed so hard in a movie must be Ayo Makun’s 30 Days in Atlanta.
Locations were spot on and the roles were properly interpreted despite a few gaps. The use of pidgin as the primary language of communication showed that we placed the issue within the economic and social class of the society where the issue is most found. It means a wider audience will be captured and lessons will be deeper. The scripting and casting was also spot on and deserves applause.
Negatives
But a number of things could have been better. Here are some of them below:
Mannerism – interpreting roles is one heck of a job. Acting is not easy. Leaving your primary comfort zone of behaviour and manners to act another is not easy. In this instance, we see ‘ajebota babe’ trying to interpret ‘ajekpako’ roles. It was not seamless. Uche Jumbo, Julius Agwu, and Kenneth Okonkwo were almost there. But Udoka Oyeka and Ufuoma McDermont gave themselves away by their use of language. How do you find vocabularies like, ‘defile’ featuring in a driver’s lingua?
But Omoni was my champion. That lady can act for world! I could almost believe she has spent all her life in a barracks or an Ajegunle or Mushin. Julius Agwu and Uche Jumbo remains a class act! I could not believe Julius has been off the scene for a while, given health challenges. But the interpretation of the comedy part of his role was spot on.
The makeup was just too ‘shiny’ and the costume could not relate to a market woman. Granted there will be versions of special clothes, but “biko”, their freshness does not relate with what is commonly found within such people.
I am also wondering, how we are presenting a Hausa man and his wife or wives, and we are not deploying the interference of Hausa language in their English. I could well say the producers were trying to avoid a stereotype, but this is not one. Moreover, research shows that the practice of child marriage is predominant within Muslim households or families in Northern Nigeria.
Camera operations within in-house locations was not particularly wonderful. Watchers could observe shadows of crew and cast, in scenes shot inside houses. We should have gone past this level.
But these aside, one question lingered in my mind; can we screen this movie in Northern Nigeria? I think Film house Cinema in Kano will be showing it. I am even surprised this scaled through Nigerian Broadcasting Commission (NBC) screening for public viewing, given the contentious nature of this issue. But certainly, this needs to be adopted as an advocacy tool for those working on preventing child marriage and associated issues.
Verdict: this movie is a ‘must watch’. I do rate it 7 out of 10.
New phrase alert – Welfare offering…….whatever this means, I do not know. But I am sure Kenneth Okonkwo and Omoni Oboli can tell us.