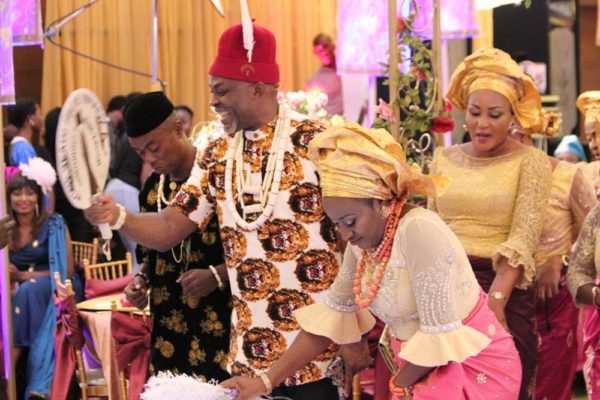 Weddings!! Weddings!!! Earlier this year, Bovi delved into the world of Nigerian wedding with his debut movie ‘It’s Her Day’ a comedy tackling the rush and hustle of Nigerian weddings. Other films have taken advantage of the glam and drama of Nigerian weddings to entertain us. As far back as the classic, ‘Wedding Fever’ featuring the iconic Saint Obi and Rita Dominic, we saw all the tension that comes with preparing for a wedding. There is also ‘Two Brides and A Baby’ it also thrives on the theatrics of Nigerian weddings.

The Wedding Party takes the same wedding theme but it makes a splash from a different angle. The thing is, a director can walk into a wedding venue in Nigeria and have a truly entertaining film without a script, or professional actors or any plan to shoot a blockbuster because Nigerian weddings define drama already.

The Wedding Party is set in Lagos, Nigeria. Dunni Coker, a 24-year-old art gallery owner and only daughter of her parents is about to marry the love of her life, IT entrepreneur Dozie. Because of Dunni, the couple take a vow of chastity. It is difficult because of Dozie’s history as a rich, philandering young man but Dunni is able to trust him despite all the odds. The date is set and the bride’s parents, who have recently enjoyed a surge in their fortunes, are going all out to make this the wedding of the century. Dunni and Dozie’s parents are not the best of friends. Obinauju, Dozie’s mother and potential mother in –law to Dunni is not ready to accept totally, Dunni’s family because she thinks they are beneath them. The Wedding Party is truly a party of many events; it cajoles a couple of separate but intertwined scenes and makes a whole film.

It starts with a couple in love and then we are introduced to the wedding planner that is desperate to make her mark and gain a big pay check, to the zealous bridesmaids. There are also the uninvited guests showing up and stirring drama at the wedding venue, the entrance dance by the families. The strange man of God that shows up to announce to everyone their sins through prayers, ‘the side chic’ and the old flames trying to strike their mark at the wedding and so much more. The best part is that all these small situations are used for a bigger story and it does not get confusing. The Wedding Party has a well-constructed script that works perfectly; it’s not a comedy about trust or the struggle towards marriage. It is a bigger story about inter-tribal weddings, love, about peace, about money and some of the problems we deal with as humans. The Wedding Party tackles most of the problems we see in our society using the dominating theme; a wedding. The idea of inter-ethnic marriage is unacceptable in some parts of Nigeria. It is not a problem that is verbally explored in the film but symbolically the film tackles this problem and it is the best decision made by the script writer Tosin Otudeko. There was so much that symbolised the beauty of diversity in the Wedding Party, from the Wedding dance, the food and their dressing, even the music and mode of behaviour. It was a fantastic addition to the whole story. The divide and the rejection we continuously uphold to due to our different ethnicity or status are issues the writer brings to life. These are issues that are bigger problems than we acknowledge and since any conversation on marriage gets the most attention, the smart decision was to make a comedy about love and a wedding and through that pass a bigger message. The Wedding Party swiftly accomplish its mission of making us laugh but it does it with a story that is deep and triggers reflection on our relationships with our families, neighbours, friends, lovers or even enemies. The point is that there is joy in laughter and in extension, there is joy in togetherness and trust. It makes life easier!

The film does not feel too familiar and it does not feel too new but it works perfectly in creating a new experience and passing an important message that leaves us satisfied. After all the glitz and the glamour, through the dominating divorce stories and the unstable marriages in our society, one thing stands, a wedding should not be all we expect of it but a wedding can be a uniting agent not specifically for the couple but even the worst enemies and the Wedding Party serves as this reminder. An attractive cast is what makes The Wedding Party memorable and perhaps enlists it on the classic category. Sola Sobowale equips the film with a smoothness that turns the whole experience  to gold.

The film hits its amazing marks because there is a compilation of natural comedians but the presence of Sola takes comedy to a unique level. She is bold, well-rounded and even when she is not trying, we are laughing because as a professional she understands what to do and by that she completes the vision of this film. It makes her memorable and adored but it helps us exalt the film. She makes a career statement that refreshes our memory. Emma Oh My God manoeuvres his way to being one of the most memorable faces in The Wedding Party. With him, the film reaches its goal. He shows he is in need of a large pay check and it works flawlessly. He combines rhythm, impersonation, reality and laughter in less than five minutes. Banky W makes a commendable effort as Dozie in his début performance. He was calm, he was smart and he was what Dozie needed to be to carry the story.

The film’s greatest assets are the cast, director and script writer but it also thrives on Mo Abudu’s fantastic model of marketing her films and technically speaking, cinematography and the sound are elegantly arranged to give us an experience that is truly enjoyable. The Wedding Party is worth the time and the money. Go see it.