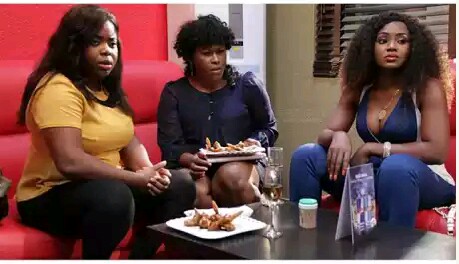 The topic of marriage triumphs over every other topic in Nigeria. It is interesting to talk about marriage. The blogs know this. Social media knows this and many times we have seen conversations on marriage trend on different platforms. It is either people are getting ready for it, getting into it or getting out of it. Marriage inspires Rita Onwurah to write a script. Her concern is the female desperation attached to marriage.

Three friends Bimbo (Nsikan Isaac) Ufuoma (Andrea Chika) and Tricia (Uche Jumbo) have wonderful tales to tell about the relationship they have with the men in their lives. Tricia is in a relationship with a married man, Mofe (Desmond Elliot). She requires the same attention he gives his wife. His wife is always the subject of their argument.  Time is not on her side and her mother is not patient with her. The motive of going after a married man is never fully explained in the film. Ufuoma is a plus sized, homely wife she seems to have the happier relationship but there is a threat- her husband’s colleague who is slimmer is causing her trouble. Bimbo never gets it right with men. It is either a closeted married man or an irresponsible guy that can’t even pay for lunch, she has seen it all. In their desperation, Tricia and Bimbo end up in Prophet Nebu’s house, a religious doctor that claims to talk to God through a headphone. He promises to help them resolve their men issue but they all end up losers.

Prophet Nebu starts out really interesting. These women suffer from issues that make their struggle interesting. Every conversation they have has to revolve around men. The writer crafts a story that some women will find relatable. Her take on certain issues- especially the issue of marriage, makes the film highly enjoyable. Desperate situations call for desperate measures and even though Tricia’s story gets the most attention from the writer, we don’t really see the pressure Bimbo is going through with family; only that she has had terrible experiences with men, they both end up with the deceitful Nebu. As soon as we see him we know he is out to cheat, to ruin and to gain some personal wealth and he does.  In this New Year alone, I’ve lost count of how many announcements I’ve seen from churches promising single women that this is their year. Some times when they attend these churches with the hope of graduating from the single ladies club, they end up being swindled or being more broken than they went to the church. Rita Onwurah crafts a very interesting story that gets us laughing and  makes us question what is ideal in our society.

Rita writes with the experience of a woman, she even dives into the tension between married women and the single women, we see tension play out at a party where Tricia, Bimbo and Ufuoma meet one of their friends who is married and pregnant. They are not comfortable with her and when she leaves they have a thing or two to say about how she managed to get a husband. It is also interesting to watch from Tricia’s point of view, to understand why she is interested in a married man and why she is even ready to convince him to leave his wife.

Production quality is not too good. The sound is highly problematic, at some point the actors’ lips were moving but we could not hear the conversation they were having. The microphone makes its way to the picture on screen severall times. An error that escaped the attention of everybody involved in this production.

While the film is highly comedic, if you love high quality work you will have a lot of problems with the technical production on “Prophet Nebu” but if you need a reason to laugh, this film will help you.