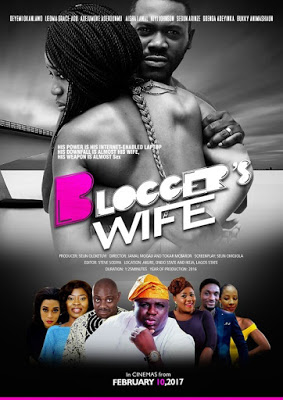 Warning! Warning! ‘The Blogger’s Wife’ is distinctly unwatchable. By all means, avoid it! There just aren’t too many ways to say it, than to say, there’s absolutely, totally and utterly, not a single thing about this movie that can be praised. It is an excursion in boredom, frustration and pain. Literal pain. You will feel it.

‘The Blogger’s Wife’ is horribly flawed in almost indescribable ways. And to enunciate just how deeply flawed and grotesquely sub-standard this movie is, a single example will suffice- The credits.
The protagonist, Fred, is the blogger. His wife’s name is Bola. Bola has a younger sister, whose name we can’t readily recall, but for the sake of our example, we will use Tayo. They all feature prominently in the story. However, at the end of the movie, in lieu of character names, the credits read- “Fred wife,” “Fred wife sister,” “Fred wife sister friend,” “Fred friend girlfriend” and so on. It is so unbelievably bad, we wish now, that we had grabbed a screen shot.
Severely not recommended, for anybody!