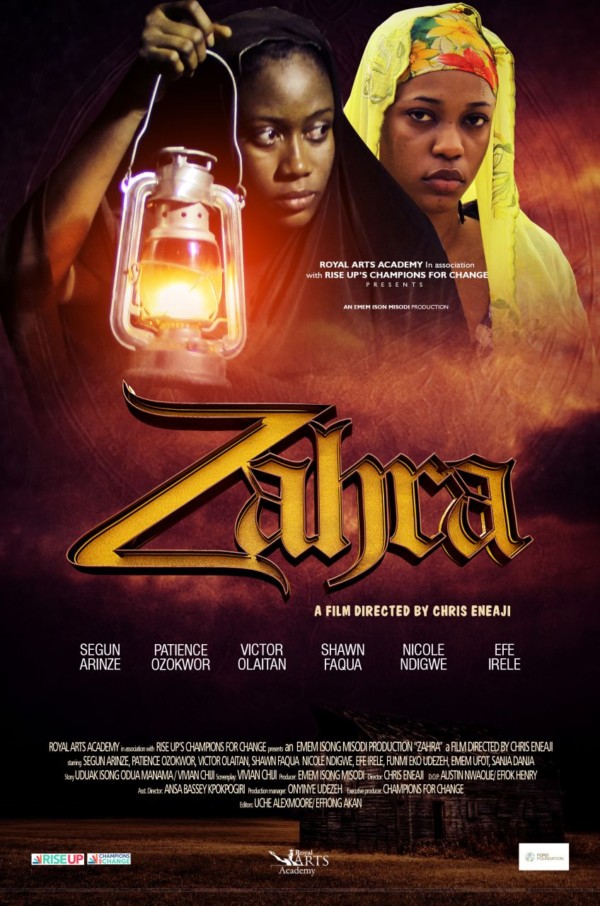 Zahra (Nicole Ndigwe) is 16 years old and a victim of the Boko Haram insurgency. Unfortunately, instead of getting an education, she lives with hundreds of other people in an internally displaced camp, hungry and fighting to survive.

The camp offers different painful stories, especially the story of Safiya (Efe Iriele) who dies from pregnancy complications due to the poor health system in Nigeria. Safiya gets raped by her father in-law and ends up pregnant. Majority of our story comes from Zahra, who also serves as our narrator. Zahra is a young girl with dreams, but the situation in the society crushes these dreams. She is mostly a silent character until the injustice forces her to fight for a little fairness.

Zahra is a film by Royal Arts Academy and it is an advocacy project. It encourages fairness, it encourages us to speak up against injustice, if we speak more and if we are ready to fight for justice, we are capable of getting a responsible government that cares about the plight of the people. The writer does not just accuse politicians of the problems in our country; she accuses the masses, which we find incredibly impressive. We see babies sold off by the people put in the position of control. There is focus on the reluctant services offered by our health care personnel’s; a selfish driver is also featured. All these ills demonstrate attitudes you will definitely find in Nigeria. On one hand, as a people, we constitute our problem, and on the other hand the people we vote into office further complicate these problems.

We have an impressive view of politicians using the plight of the internally displaced people to gain votes, and how the hungry masses play a part in this success.

We love that there is a narrator and Nicole Ndigwe is the story’s greatest asset. She controls the narrative with impressive acting and a suiting voice over. Shawn Faqua also does an incredible job as the teacher. Shawn saves our main character from being raped twice, and he is almost raped too.

The first minutes of Zahra has its faults because of the insistence to use a Hausa accent. The cast struggles with adapting the Hausa accent, Efe Iriele gets it, but Damilare Kuku and Nicole struggle. As we continue through the story, our ears get used to Nicole and with the heavy themes in “Zahra”, Nicole’s imperfect Hausa accent is the least of our worries.

We have followed many of Chris Eneaji’s features and we can boldly commend this as his best. He has struck balance between comedy and socially conscious films, and Zahra is different from anything he has ever handled. The cinematography is pleasurable and the sound is good too.  Vivian Chiji does an impressive job of handling the script. Dialogue is hard hitting and remains memorable. Zahra was clearly a passion project and we appreciate that this film was made.