For this young star, it’s all or nothing. Check out five things you didn’t know about her

Past movie you’d love to star in: Any movie that has fascinated you and you wish you had the opportunity to feature: The Wedding Party! Outside of Nollywood, I have several favourites, but I’ll go with 12 Years A Slave.

What made you want to act: I was looking for a new challenge. Something to help me escape my job as a TV producer which wasn’t challenging anymore, I fell in love with the first character I ever played, a lead role in Emerald TV drama series. I loved how it was a huge opposite from my reality and how I was able to be that person – a streetwise call girl called Tina. It made me want to portray more characters and bring to life stories that allow me to be different people and live different lives!

Nollywood pet peeve: The stereotype that all actresses are “hustlers”

Worst audition: One time, when I walked into an audition room and for some weird reason I lost all the emotions I was supposed to express while doing my monologue. It was a total disaster and it reflected on my face. I came out with a fake smile trying to convince myself that I still had the smallest atom of acting talent and skill in me.

This theatre arts graduate from the University of Ibadan is witty and ready to take on Nollywood. 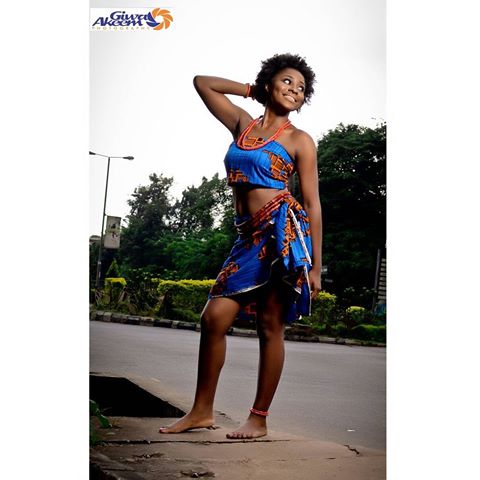 Far from being a newbie, she’s featured in several productions including, Kakadu the musical @ The Mandela Joburg Theatre; Princess Ruka and the Bachelor of Kings; she also featured in the TV show, Family First and she was so impressive. Read our chat with her below.

Past movie you’d love to star in: Any movie that has fascinated you and you wish you had the opportunity to feature – It would have to be ‘Isoken’. I love what they did with it; telling a simple story so beautifully. It was perfect in my eyes.

The most Nollywood thing about my life – That would be me relocating to Lagos to pursue my dreams.

What made you want to act – Two things really? As a child, I recall sneaking downstairs at midnight with my sister to hide and watch the movies my older aunties and siblings borrowed from the video club. Plus, I’ve always been fascinated by the mirror. I would stare into the mirror every opportunity I got and act out the characters that fascinated me on TV when I was alone. When I was 12, I became convinced it was what I wanted to do with my life.

Nollywood pet peeve: Definitely, would be the audience being played for fools; inaccurate statements said like they were factual, unrealistic writings; and of course, older people playing school boys/girls.

Worst audition: That would be an audition I went for pretty recently, I had two auditions that day but I decided to go for that one first since it was closer. On getting there, after being needlessly delayed, we were grouped and given some forms for, wait for it… Eko Got Talent audition, I’d never even heard of it before that day. Turns out it wasn’t even an audition as such, the worst part was not being able to make it to the other audition venue because of the infamous Lagos traffic. I just couldn’t shake off the feeling that something good would have come of it.