The city to city spotlight on Lagos from the Toronto International  Film Festival is such a big deal. Like Genevieve said during her interview in “a conversation with…” Nollywood needs more exposure, more distributors and we want our stories to reach every corner. This year has to be one of the best for the Nigerian cinema. The year is not over and there are more spectacular films for us.

We were not at TIFF 2016 but here on the blog, there were continuous updates of everything happening from TIFF, including the red carpet appearances, brief interviews and so much more.

We were also following the reviews from TIFF and by the reviews we have read, we are sharing with you the most raved Nigerian films from the Toronto film Festival, from Number 1 to 8. This list is based on reviews we read from international film websites such as Playlist, Variety, Screen Daily and Toronto Online Film Magazine.

The reviews are very hopeful.

76 had the brightest review from the websites that published the City to City reviews. If the trailer did not give you goosebumps, check this out:

The Playlist an American review site gives the film a B- rating and that is good going by film standards. The actors were highly praised on the Playlist.

What they wrote, “Izu Ojukwu’s latest film serves as a mostly memorable and occasionally unexpected melodramatic retelling of an important moment in the history of this West African country… 76 leaves an enticing mark on the audience.” The best part of the review is it was called the Most Successful in Introducing the Nollywood cinema to the Western Audience. How impressive!

Though the filmmaker insists that it is not a biopic, reviewers could not help but notice the in-depth research that went into the process of making this film.  From CNN: ´The picture of Nigeria outside is really, really bad…but this film shows the light that comes out.” CNN calls the film a ‘courageous’ health care story.

American film reviewer Riley Haas adds: ´Though it follows the exact pattern you would think a disease film might follow, it is gripping and filled with strong performances. Moreover, there was money behind this film, and so it feels of the same level of quality as an Indian studio film, or even an American or British studio film. Before I get to the nit-picky stuff, let me just say that this is a story that needed to be told and a story that should he heard. And it’s done well.”

It got a standing ovation and was screened several times to a sold-out Toronto Audience. The film was released in Nigerian cinemas on Friday, the 16th. You should check out this story that promises inspiration, heroism and sacrifice. Most critics hailed the film as a glorious labour of love.

Surprise, surprise! Green White Green comes before all the other films you were expecting. This is perhaps the most reviewed Nigerian film from TIFF. Many reviewers have written about it.

The Toronto Online Magazine writes, “The endearing Mosaic of young Nigerian life pulsates with energy and exuberance in Green White Green.” The review continues, “It may be one of the most accessible city to city titles at TIFF this year”.

Screen Daily Writes: Abba T Makama gives us a rousing celebration and a satire of the phenomenon.

Toronto film reviewer Andrew Dobson adds: “Aside from the cast, there are several reasons to like this movie. The soundtrack is great. The music is hip but with a blend of African sounds which makes it a good reflection of the movie itself. The opening of the movie is an interesting take on the introduction as it gives a good overview of Nigeria, its people, and its culture but still exists as part of the actual storyline. The way the movie is shot is visually appealing because it resembles a Solange Knowles music video or a movie from Spike Lee. Overall, watching Green White Green is like spending an afternoon with friends. It’s both fun and funny and will leave you a little more knowledgeable than when you started.” 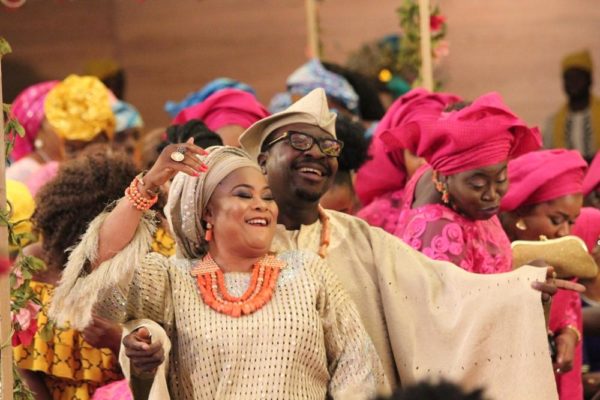 Kemi Adetiba’s The Wedding Party promises laughter and for most of the Nigerians that watched the film at TIFF, it was a trip back home, a display of colourful culture and the rhythm that follows Nigerian weddings with a good story to back it up. The feedback on The wedding party was hugely on social media. It is mentioned on review sites but no official review yet. It should capitalize on word-of –mouth and the trust Nigerians have on the people that have made the film. The social media buzz was highly impressive.

Apparently, critics wanted more from this film. There is an engaging review of the Arbitration here on the blog HERE  and quite a number of critics expected the film to do more. Somkele and Ireti Doyle were the highlight of all the reviews. Both actors were hailed for giving fantastic performances.

“Despite a fine cast, including Iretiola Doyle as Gbenga’s lawyer and Somkele Iyamah-Idhalama as Dara’s, the rhythm of the piece feels awkward, and the camera lingers ways too long on reaction shots, seriously messing with the tone – audience members at the screening I attended tittered often. The sound is awful, with scenes recorded at inconsistent levels. At times, the actors can’t be heard.”

We know this has a place in our heart. The impressive cast, the story, the method and everything else, we have seen Taxi Driver. We’ve made our judgements on the film, not that a Toronto review will change our mind-set. It is refreshing to see it get some international presence, especially as it is the only film that at least, offers a Nigerian dialect as its main mode of communication

Cameron Bailey the Artistic Director of TIFF describes this feature as the favourite of all TIFF Staff.Many other review sites call the film an eager attempt that manages to shine.

Surprisingly, not much has been said of Omoni’s Okafor’s Law. A few reviews have called it an unfinished project.

Hollywood reviewer Riley Haas writes: “For the first two-thirds of this film, it is a reasonably amusing Romantic Comedy – not my thing but effective and, for someone like me not familiar with Nollywood, a decent spin on the formula, despite a few sound issues. But the wheels come off in the third act, with not only a few major tonal shifts (and some violence!) but an ending that makes zero sense”.

TIFF 2016 is over and Nollywood has gotten the much-needed spotlight. Almost all the reviews hailed the actors for incredible acting and the growth of the stories were applauded. However, what was a major concern to most critics was the cinematography and sound, a lot of bad comments for these two aspects.

At least Nollywood is moving in the right direction. So proud of all the films showcased at TIFF and we look forward to checking out those that are yet to be released. Support Nollywood. Watch a Nigerian film today.