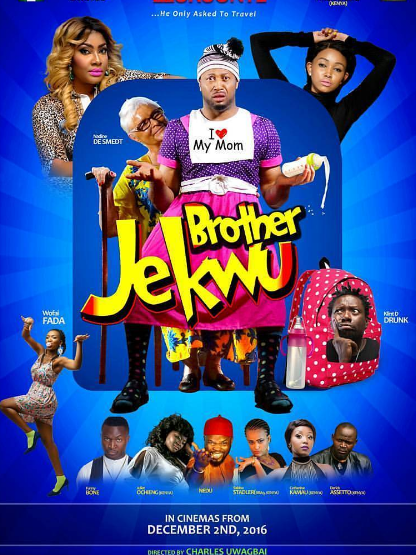 Actor, Mike Ezuronye has added another feather to his cap, as he concludes work on his debut movie, Brother Jekwu, as executive producer. Brother Jekwu, which industry watchers have described, as ‘ambitious comedy’ was largely shot in Kenya.

The movie is the story of a village champion who is fortunate to make it to Kenya on the bill of an unscrupulous cousin. His encounter with people of the underworld and two beautiful ladies led to series of comic events that add twists to the plot, making it one of the funniest movies from Nollywood in recent times.

Mike who played the role of Brother Jekwu with larger-than life image and earth-shaking English catches the attention of Kenyan police, beautiful ladies and an exceptional grandma, who wants a piece of the action.

The movie, which is distributed by Filmone will be in the cinemas across Nigeria from December 2. However, speaking on the movie, Mike said Brother Jekwu is the most challenging projects he has done.

“I have been involved with many movies, this one is the most challenging. Not only did I have to source for fund to finance the movie, I had to travel to Kenya with about 20 people to complete the project. Travelling to Kenya is more expensive than travelling to some European countries. We had to put all sorts of things together and put out a well thought out comedy for people. This is one comic movie with well-defined storyline. You will laugh, enjoy the story, learn without getting bored.”